As if it couldn’t get any better, it does. Benton Elementary has held the state archery title every year since 2012-13. They’ve been National Champions twice in 3D, twice in Bullseye, and have recently brought home their third World Champion title.

Not only did Benton Elementary bring home the trophy, but Kingston Elementary, Benton Middle, Benton High and Haughton Middle were on target and all placed in the top four at the 2018 NASP World Archery Tournament in Louisville, Kentucky.

Coach Beth Duncan said there’s a personal drive in each student that helps the team come out on top.

“There’s a competitive nature in each one of them and it drives them to be the best. Some of them don’t even realize how big a national title or world title really is. There’s some very fierce competition out there.”

At the NASP National competition, Benton Elementary placed 3rd out of 171 teams in the Bullseye and 2nd out of 67 teams in the 3D. In the Centershot Nationals, they came out on top in 1st place, earning the title of Centershot Elementary National Champions. 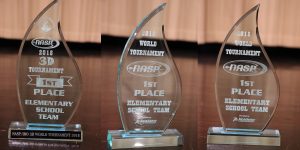 Archery has been a tremendous success over the years in Benton schools.

“Archery is huge,” Duncan said. “It’s brought an opportunity to these kids to participate in a different kind of sport. It’s something that’s outside the norm and one that all kids can do, no matter their athletic ability.”

She hopes they can continue their world domination next year.

“We’ve held several titles through the years, but it’s nerve-racking as a coach to wonder if we can do it again year after year. As long as we do our best, we can keep bringing it back home to Louisiana.”

The world tournament is familiar territory for Benton Middle School.

Coach Terrie Streetman said they are closely watched from the time they arrive in Kentucky every year.

“They look for us when we walk in. If we have Benton on our shirts, they know who we are,” she said.

In the NASP World 3D tournament, Benton Middle placed 3rd in the middle school division out of 46 teams and shot their way to a 2nd place finish in the Bullseye Tournament.

Also at the World tournament, Emma Rutledge shot a 291, ranking her 4th among 885 middle school girls; 2nd in the world out of 303 seventh grade girls; and when you combine elementary, middle and high school archers together, Emma is ranked 18th out of more than 2,360 female archers across the globe.

The Tigers had great success at Nationals, too, placing 3rd in the 3D and 5th in the Bullseye. Brailey Bishop shot a 295 and is ranked 2nd in the nation out of 2,644 middle school females, 1st in the nation among all 6th grade girls and 7th overall in the female division out of nearly 6,700 archers.

“Our team still holds that. We want to break our top score next year,” Streetman said.

Benton Middle swept State as well, winning 1st place in the Bullseye and a number of their archers winning individual awards and earning scholarships. They also had 21 students selected by the National Archery in Schools Program for its 2018 Academic All-American Team.

Streetman said there’s no real secret to their success. It just takes practice.

“If they aren’t practicing at school, they’ll find somewhere else to shoot,” she said. “For us, it’s about making the effort at practice and knowing what to do when you get on that national stage. It’s important for them to keep their composure and to rely on the work they’ve done in practice.” 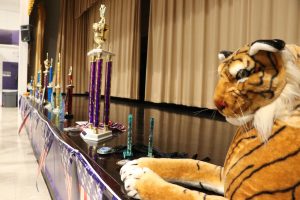 Abbie Rutledge was the lone archer representing Benton High. Abbie was the top female archer and State Champion in both the 3D, shooting a 281, and the Bullseye, racking up 287 points.

Kyle Cathcart is the coach of the Benton High archery team.

In the Centershot World 3D tourney, Mikayela Sanchezshot a 288 and placed 1st out of all elementary girls.

At Nationals, Kingston placed 2nd in the Centershot tournament and 4th in the NASP 3D tourney. In the Bullseye competition, the Kingston Cubs came out roaring and won 1st place out of 171 teams, earning a national championship title.

Kingston also placed 2nd in the state with a team score of 3,200 in the Bullseye tournament and 2nd place in the State 3D competition.

This was Haughton Middle’s best year yet for archery.

The Buccaneers placed 4th in the world 3D tournament out of 46 teams and rank 3rd in the world bullseye competition out of 92 teams. Haughton also won the Centershot World Bullseye Tournament.

Mallory Benton came in 1st place in the Centershot Tournament, shooting a 292, and Aidan Jones placed 5th among all middle school boys with a 289.

At the state competition, Haughton clinched 2nd place in the middle school division with a team score of 3,365.

Archery in Louisiana Schools (ALAS) is a part of the National Archery in the Schools Program (NASP) that is designed to introduce students in grades 4-12 to international target style archery. As the name states, the program is designed to be taught as part of the in-school curriculum. Most commonly the program is integrated into the schools PE program and is taught within the schools gymnasium.

The sport of archery is a great way to get students involved in not only a life long sport, but also in their school, and into the outdoors. ALAS is a program that looks to inspire confidence through the focus and discipline that sport of archery requires and the results speak for themselves. Nationwide over 16 million students have participated in the National Archery in the Schools program in its first 15 years. Just last year over 2.4 million students participated in NASP.