“Every librarian has a heart to serve. We are so much more than books and access to
computers,” said Katie Millsap.

As the newest librarian of the Bossier Parish Libraries, Millsap comes to Bossier via
southern California. The 31-year-old native of Huntington Beach and graduate of San
Jose State University describes herself as a people person.

“I love working with people. I love challenges,” said Millsap.

She came to Bossier via what she described as a “convoluted path.” One that included
an unusual career stop as a prison librarian. Once her husband left the Army and she finished graduate school, Millsap was offered a position at the California Correctional System. So she and her husband packed up and moved from Forth Hood in Texas to northern California.

“I had to take my first leap and I went where the job was,” Millsap said. “I had done my
internship in a correctional center near Austin.”

But why the correctional system? Millsap said she likes adventure and trying new
things.

“When I first heard about it, I was hooked. I wanted to try and experience it.”

She also feels like her open mind and willingness to help people made her the best
suited person for the job. 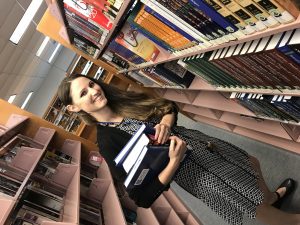 “It’s a shunned part of society — people don’t want to work with them. I felt like I could
have an open mind and be non-judgmental,” Millsap said. “I knew I could be impactful in
someone’s life, whether it’s supplying reading material or giving them the resources they
didn’t even know they were interested in.”

Although she worked in a prison, she said she was comfortable. But she still had to
think ahead and make some precautions.

“I had to walk through prison yard. Everyone knew me,” said Millsap. “I wore bright pink
shoes so the guards in the towers knew I was the librarian, that way if I ever deviated
from my path they knew something was wrong.”

But she was quick to note most of the people she worked with and helped were still just
that — people.

“They’re people who made bad decisions and did some things that were not helpful for
their paths in life. But most of the time, I had a great opportunity to work with them,” said
Millsap.

Her favorite moment from her experience at the prison was helping a father be able to
bond with his child through books despite their distance apart.

“We had one inmate who asked if we could get a children’s novel because his child
wrote to him and was reading it in school. He wanted to read it so he could write to him
about it. I made sure to get it so he could have that bonding moment with his child,” said
Millsap.

She is currently earning her PhD in literacy online through St. John’s University and in
the future Millsap wants to use that degree to better serve those incarcerated and give
them skills that not only serve them behind bars but helps re-establish the skills they’ll
need when they’re released.

“We try to be the heart of the community and find the needs to serve the population,”
Millsap summarized.

After 13 months, she left her position in the correctional facility to change within her
field, taking a job as an academic librarian in Longview. After working there for two
years, she learned about the position with Bossier Parish Libraries.

“It sounded like an incredible opportunity,” Millsap exclaimed. “I want to go where there
is opportunity and a chance to serve the population. I like to learn new things and take
on new challenges.”

She said the job has been a huge change for her, especially in the services and how
they’re provided. 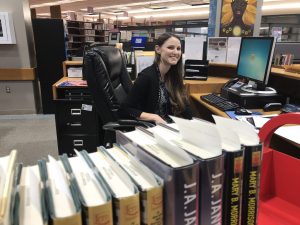 “You still have customer service, that doesn’t change. But user needs are very different. I used to need to know how to find engineering research, now I need to know who is playing who in a high school football game,” Millsap laughed.

She said the job description depicted Bossier City so well that it sounded like a place she couldn’t be a part of and was something she couldn’t turn down.

“This was an opportunity to step in before the leaps and bounds of progress,” said
Millsap. “It’s progressive. My eyes are open to what can happen in the future.”

Although she’s only three weeks in, her favorite thing about working at Bossier Parish
Libraries is how community driven it is.

“We don’t put programs out there for fun. We find out what the needs are of users and
how we can best serve them,” Millsap said.