A short ways east of Bossier City’s center lies the future of the area. The National Cyber Research Park (NCRP) is a physical monument to vision and dedication. The anchor tenant of the park, the Cyber Innovation Center (CIC), serves as the catalyst for the development and expansion of a knowledge-based workforce throughout northwest Louisiana.

Kevin Nolten, director of academic outreach for the CIC, called the NCRP the physical
manifestation of everything the CIC and Bossier leadership is trying to do when it comes to the world of cyber. He pointed out that a student can leave high school, attend BPCC for a 2-year degree, walk across a parking lot to the Academic Success Center to continue their education for a 4-year degree, and then literally walk across the street for a full time job at GDIT.

“We are building and educating the next workforce. We are an economic development
engine,” Nolten said. “Not only will that benefit our local economy, but it’s being seen as a model that can be dropped into Dallas, Chicago, Florida, Washington DC, or even rural areas of the country. You see that physical manifestation in this research
park.”

Originally seen as a means to an end — a building to support the, then, newly proposed major command U.S. Air Force Cyber Command (AFCYBER) — the CIC and the NCRP pivoted to a new mission when AFCYBER was downgraded to a numbered Air Force and located primarily at Lackland Air Force Base in San Antonio, Texas, in 2009. Parish leaders settled on a public-private partnership that would become a technology hub and ground zero for building a workforce to strengthen national cybersecurity.

That mission was strengthened when the U.S. Air Force chose Barksdale Air Force Base as the home for Global Strike Command by giving them another opportunity to devise a plan and workforce that would modernize the nation’s nuclear capabilities, as well as spin off new businesses from that.

The “Cyber Command” play generated a lot of attention and it’s a tag that the CIC and
NCRP have found hard to shake off. Many people heavily involved with the CIC and its
mission will tell you that if the average person were quizzed on what the NCRP and CIC are, many would say, “Cyber Command.” While inaccurate, it’s not necessarily a
negative either. Nolten points out that what the CIC does is a matter of national security through work to support Barksdale.

But he wants the public to understand the importance of the park. 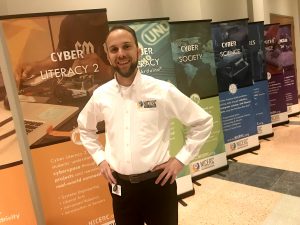 “I hear it in the grocery store, ‘Oh, you work for cyber command,’” he laughed. “We need to tell the community what cyber is. If we can get an understanding of cyber, we can understand how it affects not only companies like GDIT, but the English arts, math, science, social studies. It plays a role in medicine, law, education, and I can keep going. These are the types of things we’ll begin to understand.”

He adds that the community is benefiting from the talent and companies being recruited.

“We want folks to live, work and play here. When I say ‘something to be proud of,’ I
want to be the living testimony for what we’re trying to do. I can say I was born,
educated, went to college, and now work all in this region. It’s proof that this is a thriving area, an up and coming area,” Nolten said.

Nolten’s primary gig is heading up the National Integrated Cyber Education Research
Center (NICERC), which advances the CIC’s academic outreach and workforce
development programs. He’s the man in charge of forming the first link in chain that will create a sustainable knowledge-based workforce that can support the growing needs of government, industry, and academia in the U.S.

“There is a lot of pressure,” Nolten admitted. “But you get over it by not focusing on
what we need to teach but how we need to teach it. If we can solve the ‘how,’ students
can create connections with what they’re learning in algebra and what GDIT and
Barksdale need.”

As the first stop along the path of cyber education, NICERC’s goal is to get students
interested in cyber STEM based programs and have them continue that path at local
colleges and universities like BPCC and Louisiana Tech.

“I have this idea of a ‘Cyber Interstate’ with multiple on ramps. One is K-12 education,
another is 2-year and 4-year universities. The goal is to ensure that whatever level the
student starts into that knowledge base, they have the tools and resources to be
successful,” Nolten said. 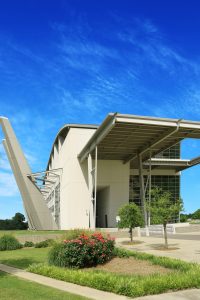 Essentially, NICERC created a curriculum from the ground up for K-12 students that gets students introduced and attracted to cyber careers. Since being developed in 2010, that education model has been replicated and rolled out across the entire country.

“Talk about something to be proud of, we have an education model being replicated across the country. We’re just shy of 14,000 teachers being trained with curriculum developed in our backyard, 2.2 million students have benefited from programs we have written right here at the CIC,” Nolten pointed out.

And that curriculum is not only being replicated across the country, but it acts a
recruiting tool for bringing some of the best and brightest to NWLA. Nolten revealed that a NICERC camp at Eastern Michigan University caused a student to completely change her career trajectory and enroll at LA Tech in cyber engineering.

“They’re coming in from all over — New York, Michigan, California.They want to be in
northern Louisiana. If we can get them an education here in north Louisiana, the
likelihood of them staying here after college is even greater,” Nolten said.

That opportunity got a big boost last October when NICERC received a Department of
Homeland Security grant worth $21.5 million over five years to expand its educational
efforts. The result of the grant will see NICERC’s curriculum in 20,000 school districts,
31,000 teachers trained across 2,000 campuses and events, 25 full-year courses
spanning all grade levels, and 7 million cyber-literate students.

“We can ensure the foundation is being poured at the K-12 level and students can
obtain their industry certifications, and show that companies like GDIT can thrive,”
Nolten said. “We talk about how GDIT can exceed employment goals, and by that I
mean, blow them out of the water. All because we have the necessary talent here.”