May is a time for citizens of Bossier to recognize local veterans for their service to the military and local community. Billy Weatherall is one such veteran who works to inspire Bossier citizens to strive for physical and spiritual health through his non-profit business, Christ Fit Gym.

For Weatherall, running the gym is more than a job, as his passion goes deeper than simple fitness.

“I love Jesus and I love fitness and that’s what God has called me to do,” Weatherall said.

Christ Fit Gym, located about one mile north of Interstate 220 on Benton Road, started out of his home in 2006 when he suggested a slight change in what had become the normal post-workout routine. Instead of drinking, he wanted to read the Bible and have devotional time.

The path that led Weatherall back to Bossier City and into business at Christ Fit Gym was anything but easy however. He enlisted in the Army infantry in 2000 and eventually was deployed to up-state New York in early 2001. Initially, Weatherall said, “The military was everything I ever thought it would be.” His view would change however as the world changed on September 11 of that same year.

“We were the very first unit deployed,” Weatherall said. “I remember our colonel standing in front of our battalion and he’s saying, ‘Guys we’re going to war.’”

The reality of war set in quick for the then twenty-year-old Weatherall. Walking battlefields with dead enemy soldiers revealed more of war’s true horrors.

“As we’re walking over the battlefield I’m looking at soldiers and I would think that we have a picture of this enemy as big, bad and evil, but I remember looking at the bodies and just seeing young boys,” Weatherall said. 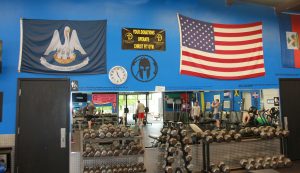 The truth of war became more real each passing month and each passing year for Weatherall, who served six years before returning home to Bossier City. He found returning to life as normal to be difficult. A life of drinking and despair led him to plan to end it all and take his own life. When that time came, he instead called out to God, seeking to give his life to Him.

The journey turned at that point. Before long, so many people worked out with him there that he had to either stop or take it to a different building. Thus, Christ Fit Gym was born in a flurry of faith and trust in God’s plan for his life.

“I have purpose in my life and every morning I wake up knowing that God has called me to do something great for Him,” Weatherall said.

Though keeping a non-profit gym open and running is a constant challenge, he remains true to the task.

Weatherall believes military appreciation and remembrance in May is important.

“People have always been so nice to others in uniform but sometimes I don’t feel others understand the sacrifice,” Weatherall said. “The sacrifice of leaving your family and your children for over a year, not [being able] to talk to them and only being able to write them letters. When I was deployed overseas, the world stopped turning but time didn’t stop back home.” 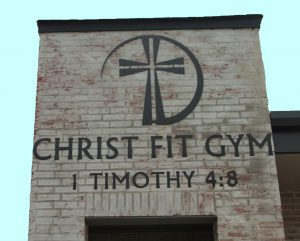 Remembering our veterans in the month of May is a helpful and hopeful way to appreciate the sacrifices they have faced and continue to face. As Christ Fit Gym proves, local veterans are to be appreciated not only for their time overseas but also for their contributions at home.