From the time Norvel Blaylock met Barbara Kennedy at the post office near Centenary College, he was welcomed into Barbara’s huge boisterous extended family, with one possible exception.

“When Barbara and Norvel were dating they sat out on our front steps after dark talking,” said Kathy Kennedy Price, Barbara’s younger sister. “Mama (Essie Laird Kennedy) would come home from work, walk our dog Snuffy, and stop and visit with them. One night Snuffy raised his leg and peed on Norvel’s back. I don’t think he said anything. He was always so good to her.”

“If all mothers-in-law were like her, the world would be a better place,” Norvel said. “She pulled so many pranks on me; most I can’t tell you about.”

A quiet, thoughtful man, Norvel was too shy to ask Barbara out when they frequently saw each other while picking up mail for their jobs.

“I finally got up my nerve to ask her out. We dated about nine months and then I asked her to marry me.”

The wedding at his parents’ Plain Dealing home was officiated by his stepfather, a Justice of the Peace.

They have been married almost 55 years and have two children, Kristi Blaylock Bellamy and Kris Blaylock, and five grandchildren who call them “Nana” and “Papaman.” 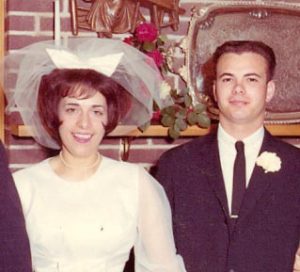 “When your children are young, you are so busy you don’t have time for yourselves,” said Barbara. “We used to say, ‘Whoever leaves first takes the children!’ But when your children are grown and having your grandchildren, I really believe you fall in love all over again; maybe with even more passion. Our honesty with each other and our communication with each other keeps us together.”

In 1970, Barbara told Norvel the baby was coming and he began loading her things into the car for the trip to the hospital.

“When he goes back into the house, she is putting makeup on and fixing her hair,” said Kristi. “Dad says to her, ‘I thought it was time!’ She assured him they had time and continued to get ready. Finally, out into the stormy morning they go and as dad closes the car door he hits a mimosa tree limb and slings water all over mom. Dad gets in the car and realizes he has left the keys on the kitchen table and has to crawl through a window to get them. Mom always laughs and tells that he stopped at every light on the way. They eventually made it with time to spare.”

Their good humor and gracious acceptance of whatever comes has held steady throughout their life together: a grandson born with three heart defects, the deaths of beloved family members, and his two devastating bouts with non-Hodgkin’s lymphoma, a disease that kills around 20,000 people each year in the U.S.

“When I got my first cancer, I was 55 years old,” said Norvel, who went through both conventional treatment and an experimental program before remission. “When I got the news about the second cancer at age 74 (last year), I didn’t want to take chemo. I thought, ‘Well, I had the extra 18 years and God was ready for me to come home.’ That changed when Barbara said you have children and grandchildren who love you.” 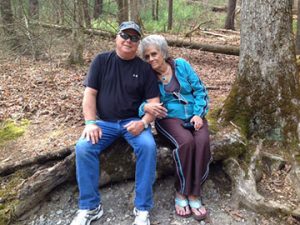 “When Stage 4 B-Cell Lymphoma knocked on our door,” said Barbara, “I said, ‘OK, we are pros at this.’ When he was at weak points I’d remind him of all our blessings and that we could and would make it together. I would tell him, ‘We have the cleanest house in Bossier because of him and he didn’t want to tick me off.’ We laughed and continued on. Remission came in the first week of December.”

The Blaylocks love to travel and each year join her sister Kathy and husband Ed, along with her brother, Jerry Kennedy and wife Delores, in Gatlinburg for a vacation in the Smokies. Sometimes other family members pile on.

“One year, Barbara and Norvel drove us all to Gatlinburg for vacation,” said Kathy. “Mama loaded up their car trunk with what she called ‘rare rocks.’ It weighted down the rear of the car so much that when we’d go over a railroad track or large bump in the road, the car would ‘bottom out’ and slam down on the highway. Norvel never opened his mouth.” 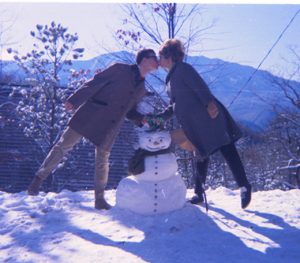 Norvel, 75, works part-time driving cars from city to city for a dealership. When he was young, he worked his full-time oil and gas industry job and had a side business mowing up to 31 yards each month to help put his children through college. Barbara, 76, worked at Prudential Insurance when they first met and then for years at Southern Carpets and then Kelly Custom Floors, where she continues part time. Both are active at their church, First Bossier.

They credit their successful marriage to “faith, family, and friends. Never forget to laugh,” said Barbara. “Tease each other and never miss saying I love you and mean it.”