The population of Bossier Parish continues to grow which means parish leaders are always looking to improve. This statement seemed to be the common theme at the State of Bossier Address that took place on April 19. The address, hosted by the Bossier Chamber of Commerce, took place at the Hilton Garden Inn’s Event Center. 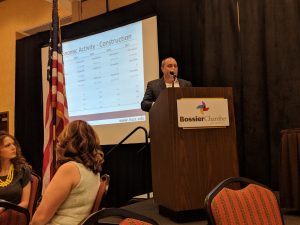 In addition to these parish and city leaders, Douglas White, Director of The Center for Business and Economic Research at Louisiana State University Shreveport, gave a presentation on economic development for Bossier. According to his data, the economy is starting to look better for the area. He says that in 2014 unemployment for Bossier was at 6.6 percent. That number has gone down and in 2018 is now at 4 percent. White says that in the years leading up to 2017, unemployment was up and output was down. In 2017, the numbers started to turn the corner and things began looking up.

“I’m a data guy, so I believe in data, but I also think its true when I’m talking to people in general there tends to be more optimism among people here, so I think the data will back up the story.”

As moderator, Johnson asked the panel various questions during the event. The leaders discussed what their major challenges are and what the top priorities are for their city and parish. At the end, Johnson asked each leader to talk about what they see in store for the next 5 years. 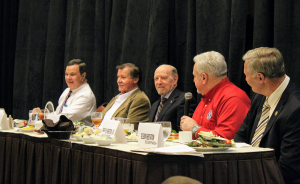 Mayor Walker says he sees a growth in technology being the trend for the future of Bossier. He also mentioned the nuclear mission at Barksdale.

“The nuclear mission is the most important mission. It’s going to continue to grow and we’ve already seen that,” Walker said.

Mayor Hicks of Haughton says he sees his town becoming a city. He also mentioned the continued growth of commercial interest.

Each leader mentioned the parish population growth and how they have to make sure they have enough resources to meet demand. Plain Dealing Mayor Smith says they are looking for highways to be finished so industry can easily come to the area. Benton Mayor Horton talked about expanding the city’s park as well as various businesses coming to town. 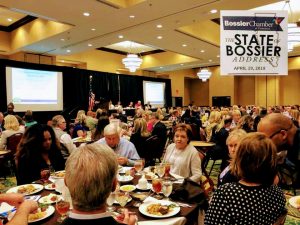 Bossier Parish Police Jury President Benton wrapped up the conversation by mentioning the population increase in correlation to making sure roads and other aspects of the parish are up to standard.

“We are trying to make a better quality of life for the people in Bossier,” Benton said.

The Bossier Address ended with Johnson encouraging attendees to stay involved. The Bossier Chamber of Commerce will be holding another event in the fall that is specifically geared towards covering the local and state education system as well as the successes and challenges facing Bossier Parish Schools.