As the Bossier City population continues to grow, so do the community’s needs. The parish has seen large increases over the last twenty years, and the Greater Bossier Economic Development Foundation (GBEDF) predicts the trend to hold through 2023.

With that increase comes the need to expand corresponding resources. One development in the works are plans to erect a new YMCA building in north Bossier. The process is still on-going, and to help move things along the city commissioned architect Mike McSwain to present potential exterior renderings in the hopes of attracting donors willing to get the ball rolling. 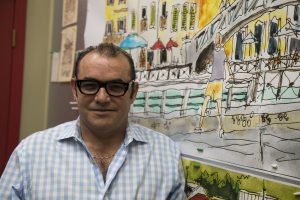 McSwain was tasked with matching the exterior design of the proposed facility to the existing Bossier City Tennis Center already constructed at the North Bossier Park. A guideline which, unsurprisingly, posed a unique challenge. This is primarily because of the size difference between the Tennis Center and the YMCA.

“Scale-wise, saying ‘hey just make it like that, but bigger’ is obviously a challenge. [The YMCA] is enormous, it dwarfs the Tennis Center. So that was the biggest challenge, taking that aesthetic and incorporating it into the new design,” said McSwain.

Another consideration involved the placement of the structure in relation to the road. As can be seen from the site plan, the road curves around two sides of the building, starting on the west side and exiting along the south side. Most of the parking is heavily concentrated along the south side of the building, which created a need for two entrances.

One functions as a “vehicular entrance,” creating visual interest for people driving in to use the facility as opposed to seeing just the side of a building. The South entrance, facing most of the parking, creates a second point of visual engagement functioning as the main entrance to the building. 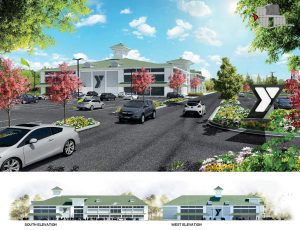 Having worked on numerous projects in Bossier City over the years, McSwain understands just how important places and spaces are for developing vibrant, sustainable communities. A seasoned traveler whose architectural designs dot the landscape worldwide, McSwain drew on his experiences when considering the design for the YMCA building. For him, the chance to observe other communities has had an impact on the way he thinks about spaces.

“I sketch everywhere we go, all over the world. What I’m doing is not just creating the memory of it, but I’m also very much a student of architecture. I’m looking at how people experience the world and how they experience architecture; how it makes place, place,” said McSwain.

A similar interest in space usage and allocation has been put forth by the GBEDF, which cites a commitment to culture and recreation as a quality of life factor that can have a major impact on economic development. Outside of Bossier, there is generally a nationwide consensus that recreational spaces benefit communities. The National Recreation and Park Association maintains that recreational spaces add value economically, have social importance, and provide health and environmental benefits.

The process of building the YMCA facility has been in the works for a while, first as an idea 8 years ago during the conception of the Bossier City master-plan, and then manifesting in more tangible ways over the last few years. 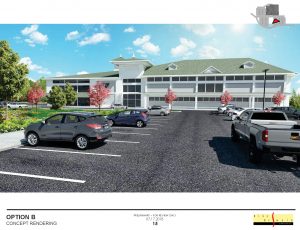 “All things take time. I take great pride in that. It doesn’t bother me that stuff takes time. The more important thing is to do it right. Take whatever time you need, because whatever you do, you know, it’s permanent,” said McSwain. “You’re building something that’s going to outlive us all. And that time is the next hundred years, not the next ten. So if it takes a little longer then that’s okay with me.”

Ultimately, what McSwain seeks to do in every project stems from his core design philosophy.

“In general our design philosophy is that it’s never our money we’re playing with, it’s other people’s money and we really want it to tell the story of that client more than [our story],” said McSwain.

He went on to add, “It’s not about us, or our design, it’s about listening to the client and letting the building be an extension of their brand, whatever their brand is, whether they’re a city or an office or, in this case, a Y[MCA], we try to let it be their story and we try to infuse creativity into that story through our training as designers.”