Every town or community in the United States owes its existence to the development of transportation infrastructure. Much of history has stories about once thriving communities that became ghost towns in a matter of years if not months, thanks to the detour of something vital like a waterway, roadway or railroad. There are countless communities that have disappeared because they were bypassed or overlooked in favor of a better route be it from natural geographic advantages or political intrigue. Either way, many names on a map today indicate places long-faded from history only to be trivial curiosities as to how such places came to be named with little or no evidence of ever having existed in the first place.

Fortunately though, Bossier City has not become one of those faded areas as it is a thriving community, being one of the fastest growing cities in the state. Just as its recent growth has relied on developments of new technology, long ago Bossier City relied on its early growth from the new transportation economy both natural and man made. Do you know the history of Bossier railroads?

1830’s: The Early Beginnings of Bossier 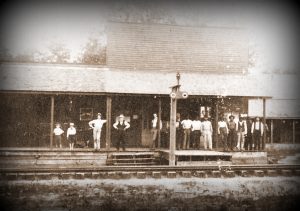 Back before there was a “Bossier City,” there was a place known as “Elysian Groves Plantation” which was the result of a partnership between William Bennett and James Cane who both co-owned a trading post overlooking the west side of the Red River known as “Cane’s-Bennett Bluff.” The trading post was one of the earliest commercial businesses in what was then known as “Shreve Town.” James Cane and wife Mary ran the Elysian Plantation household on the east side of the Red River and nearby there was a simple commercial ferry port designated as “Cane’s Landing,” another outgrowth of the Bennett-Cane partnership. This natural transportation resource allowed ferry traffic across the Red River as well as riverboats to come and go, taking loads of local agricultural products like bales of cotton, bushels of corn and sweet potatoes downriver to be shipped back east. A small settlement developed around the landing which was called “Cane City.”

The Louisiana Legislature of 1853 had a keen appreciation for internal improvements. On April 28, 1853, they approved “An Act to incorporate the Vicksburg, Shreveport and Texas Railroad Company.” This legislation hoped for a new economic day for the northern section of the state and Act 178 pledged the state’s purchase of $800,000 worth of stock in the new company. The idea of a railroad across northern Louisiana with visions of transcontinentalism was much desired. A new wave of railroad mania ensued. By the 1850’s Shreveport had become an important cotton center with a population of 2,000. It was also a supply depot for emigrants headed westward to Texas by way of Cane’s Landing ferry which encouraged the development of a westward rail line.

A railroad convention was held in Monroe in 1851 which extolled the virtues of a line across one of the “ finest and most productive regions of the South.” In 1853, the long-awaited Vicksburg-Shreveport and Texas Railroad company was officially organized at Monroe, Louisiana on January 24. But progress on the East-West rail line was stymied due to flooding of the Mississippi river which inundated desired routes as well as prevention of the shipment of steel rails for construction. There were also other impediments as Yellow Fever epidemics struck the countryside with some regularity after 1852. Then there was the Civil War in 1860 which previous construction and supply contracts for this northern Louisiana rail line were soon broken. Steel rails wouldn’t reach Monroe from Vicksburg until 1861 and while construction began in Shreveport, it was soon to be abandoned and wasn’t picked up until after the war and completed until 1884. 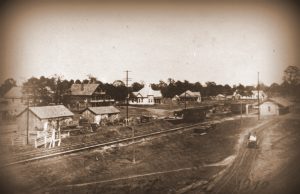 During Reconstruction in post-Civil War Louisiana, all areas west of the Mississippi attracted those seeking new lands or resources to exploit and Elysian Groves Plantation became the spot upon which all travel through the area converged. As more wagons traveled the main road, in 1870 it was decided to improve it by building a protective cover to keep wagons loaded with cotton from getting bogged down in Louisiana mud during the rains. So it became known as “Shed Road.” This was a nine-mile covered roadway stretching from Red Chute in the east all the way to the Red River and was the first all-weather turnpike in the South. Shed Road became the desired route for those heading west to catch a ferry across the Red River and onto the west bank of Shreveport and because of this transportation improvement, “Cane City” continued to grow.

Although Shed Road was an improvement for local transportation infrastructure, an east-west rail line was still very much in the works. In the early 1880’s J.J. and wife Anna Stockwell-granddaughter to James and Mary Cane, had a vision for the growing community. In 1883, they made plans for a riverfront city and began selling lots, renaming the area “Bossier City” after Pierre Evariste John Baptiste Bossier, one of the first area cotton planters and Creole General of the Louisiana militia for whom Bossier Parish was named some forty years earlier. Further to the east, once flourishing farming communities like Rocky Mount, Fillmore, and Bellevue were to be bypassed by the Shreveport, Vicksburg and Pacific Railroad that was finally coming from Monroe, Louisiana; causing population shifts en masse to other areas. The community of Haughton experienced a population boost from the migration as well as from the fledgling railroad line which arrived in 1884. Not long after, a special ceremony commemorating the completion of the east-west Vicksburg, Shreveport and Pacific Railroad, was on July 12, 1884, as a “golden spike” was driven in Bossier City by Julia “Pansy” Rule of Shreveport. It was the first such spike driven by a woman.

The North-South railroad occurred a little later as the Shreveport-Arkansas Railroad arrived in Benton in 1888 from Gernsheim (later named “Plain Dealing”) by way of Lewisville, Arkansas. This gave Benton a transportation advantage that attracted more settlement and also helped it be a more attractive center for parish government. Other stops added along the way were Vanceville and Alden Bridge. And along with the railroad came another important technological improvement: the telegraph and postal services. It was at this time that the railroad was later renamed “St. Louis Southwestern Railroad.”

Through the years the railroad companies have evolved, changed names in some cases and continued to criss-cross Louisiana bringing freight and passengers to and from all across the United States. While we may think little of the impact given today’s modern transportation infrastructure of interstate highways and airports, Bossier and surrounding areas owe much of their existence to those very first tracks of steel and the determination of those people behind the railroad and the early developers that attracted those iron-horses in the first place.

All photos courtesy of the Bossier Parish Library Historical Center