About 4 years ago, Timora (Tim) Sith hit a block in his life. He was living in Houston at the time, but he didn’t feel fulfilled. Like most young adults, he didn’t know what he wanted to do. He called on God to show him the next step.

“I’m a Christian and I have a lot of faith in God. I hit a point in my life where I looked to God and said,’I don’t know what to do, but I’m going to trust you.’ I think God was taking me to Bossier.”

So, Tim packed up his stuff and left Texas to join his parents in Bossier. He headed to a city that he says he didn’t even know how to pronounce at first (Boss-e-aye?).

Today, Tim and his wife Rachel are the owners of Crispy Donuts on Airline Drive. He says moving to Bossier was one of the best decisions he ever made.

The love for donuts has been in the Sith family for years. Originally from Cambodia, Tim’s parents learned the donut business when they came to America. In 1993, they started their own donut shop. Then, about 4 years ago, his parents decided it was time for a change of scenery. Tim’s uncle lived in Bossier two years before his parents moved here.

“My uncle told them about the opportunities that were here for them in Bossier. They wanted to get away from Houston and go to a smaller area.” 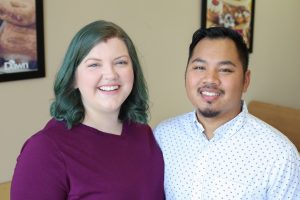 They moved to Bossier and established Crispy Donuts on 1604 Airline Drive. Soon after they moved here so did Tim. And soon after that, Tim met his wife Rachel, a Bossier native. Now, the couple has been married for 2 years and they have taken over the family business. Rachel knew that when she married Tim there was a good possibility they would end up in the donut business.

“Tim is the dreamer in our relationship. He is always planning something…I wanted to help him pursue those dreams,” Rachel said.

The couple has found a good way to mix the old with the new. Tim and his brother are the head bakers at the shop. Tim says they have kept the popular flavors, but they also create a monthly special donut for customers to try out. Examples in the past include a Fruity Pebbles donut, Captain Crunch donut, and a Thin Mint donut. They serve both cake and yeast donuts. Classic flavors include glazed, chocolate, and a fan favorite – blueberry. Of course, like most donut shops in the area, they have kolaches. A texas staple with Czech origins that has made its way to Louisiana. They also have something new that is hitting the donut scene – donuts in the shape of letters. These are great for special occasions where customers can spell out messages for their loved ones. Previous orders have included spelling out “Happy Birthday” and “Love You More” in donuts. 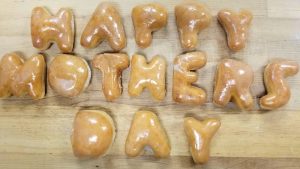 “The beauty of a donut is that it is breakfast but also dessert at the same time,” Tim said.

Rachel says creating a good menu is a mix of giving the regulars what they love and also being able to introduce new menu items each month.

“We’ve had to figure out what our audience is into,” Rachel said. “We walked into a situation where there were already loyal customers that came to the shop every day.”

While there are a few Crispy Donuts in the area, they aren’t a franchise. All the shops run autonomously. Tim and Rachel have found a way to make their shop stand out by having a fun and consistent presence on social media. They have worked hard to boost their following on Facebook and Instagram since taking over the business.

“We want to do this our way,” Rachel said. “With us being millennials, we see business and marketing in a different light.”

Rachel and Tim both admit they were night owls before taking over Crispy Donuts. Now Tim has to get to the shop at 2 a.m. to start baking. Rachel gets there around 4 a.m. Both of them say they’ve gotten used to it. That’s what you have to do when you are in the donut business. 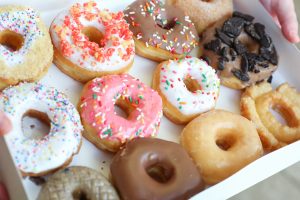 In the future, Tim hopes to use his culinary degree to add more flair to the menu. He wants to incorporate Southeast Asian flavors into the mix more. Until then, Tim and Rachel are going to continue to grow their business.

“Rachel and I want to help serve the community. Our goal is to solidify this donut shop as a staple to serve others.”