At 18 years old, Garrett Jacobs has made it into the Top 24 of American Idol. With his bluesy voice, this senior from Benton High School has been captivating audiences with his musical talent. I had a chance to chat with Jacobs as we talked his journey on American Idol and his newfound recognition whenever he finds himself back in Bossier City.

1. What made you want to audition for American Idol?

Music has been something that I’ve always dreamed about. I grew up watching American Idol and I’ve always thought it would be super cool to actually be a part of the show, so when I found out American Idol was coming back I figured why not give it a shot now that I’m old enough and I feel like I’m ready for it. So I went for it.

2. What have you gained from your experience on the show so far?

3. How does it feel to perform on stage in front of a large audience?

Performing on stage is one of the most electrifying feelings you’ll have in your whole life. It’s so amazing especially when it is something that you just live for—to be able to go up and make other people smile because you’re just doing what you love. It’s one of the best feelings out there.

4. Who inspires you musically?

I have a couple of music inspirations. I love Chris Stapleton, but at the same time, I love Bill Withers. I love Phillip Phillips, Clark Beckham and John Mayer….I have a lot.

5. That’s awesome, so you kind of incorporate their styles into your music?

I have a bluesy tone to my voice, so I’ve developed my own style. But listening to those artists have definitely helped mold me into the artist I am right now.

6. This revival season of American Idol has a whole new set of judges. What has it been like interacting with them?

They are all super fun. It’s really awesome to be able to be a part of this revival show. This panel of judges work really well together and they’re super funny together. They each bring their own special thing to the table, so I think that’s great.

7. Switching gears to things related to Bossier. April 3rd is officially Garrett Jacobs Day in Bossier City? How did it feel when you found out?

When I found out that they were declaring a special day for me, I thought wow this is kind of big. From now on April 3rd 2018 will be remembered as Garrett Jacobs Day. I was recognized by the council, so it was crazy to be able to have recognition like that.

8. What is your favorite thing about living in Bossier?

My favorite thing about living in Bossier is the camaraderie between people. Everywhere you go you’re going to see a smile on someone’s face and they’re happy to see you.

9. When you come back to town, do you have a lot of people come up to you when you’re out in public? 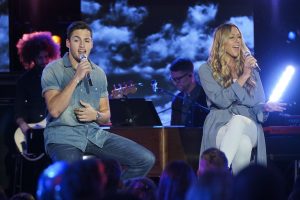 So it’s funny because now when I go out in public people are like, “Hey aren’t you that kid?” I had someone say, “Hey aren’t you that kid on the Voice?” and I’m like no, I’m on American Idol. It’s so funny. It’s crazy, but at the same time, sometimes I just want to go get a Chick-fil-a sandwich. But it is cool to have the recognition. It definitely will take some getting used to.

10. Your grandma Honey has gained a lot of fans since you’ve been on the show. How has this experience been for her?

She’s loving it. She’s the happiest because she says she has always seen the star in me and now she is seeing me get the recognition for it. Now, Honey can’t even go out in public anymore because people will say, “That’s grandma Honey!”

11. Congrats on making it into the Top 24. Everyone here in Bossier will be rooting for you. Do you have anything you’d like to say to your fans?

I would say no matter what happens glory to God in everything I do. I would encourage everybody no matter what they’re going through—no matter what highs and lows they have—you can always turn to God and trust his plan and Will. He will take you where you need to go.

You can follow Garrett Jacobs’ journey on American Idol as he continues through the competition. Tune in to ABC on Sundays and Mondays to see him perform on the show.