As a 6th grader, Chris Opp liked looking up at the clouds. He would lay in the grass and let his imagination run wild. At 5-years-old he picked up a pencil drew his first art piece and that was that. He realized his purpose.

“I stayed here because I was put here for a reason,” Opp said. “He has a reason for me to be in Bossier.”

Opp moved to Bossier in 2006. He really made his mark on the city when he approached Mayor Lo Walker with a design he had for the “Welcome to Bossier” sign. He thought the previous signs were way too plain. Opp was able to complete designs on all 5 entry signs coming in to Bossier.

These days, Opp can drive anywhere in town and see his art. He thanks God for giving him all these amazing opportunities.

“I give God the glory for the gift that he gave me. It’s all about bringing color and images to the world.”

Most artists aren’t able to live completely off their art. Opp says that he was making a living doing home remodeling and his art projects up until 2013. His projects were running out and he asked God for help.

“That was when I go, ‘Lord I can’t do this anymore. I need your help.’ and 3 days later Margaritaville called.” 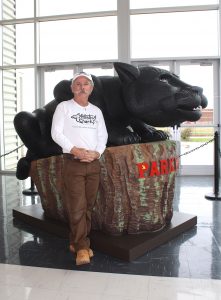 Opp painted palm trees for the casino, and the projects just kept rolling in from there. In order to make a living off his art, Opp has to be both an artist and a business man. He says that he has to think about what the client wants, but he also gets to incorporate himself into the piece.

“I’m the best at what I do whether it’s designing a logo or building something for a client…art is in the eye of the beholder, but also in the one paying you.”

Growing up, Opp had no formal art training. He says that he just had to learn by watching others.

“I watched people because back in the 70s we didn’t have the internet so I would just watch other artists and learn from them,” Opp said. “I still make mistakes. It’s all trial and error.” 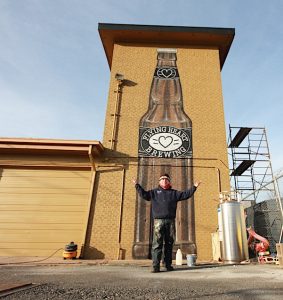 It is true that the Artistic Shark has traveled all over, but he says now the only way he’ll hit the road again is if he is visiting his family especially his grand kids. He says that his art isn’t just his legacy, but it is also theirs. Opp surprised his grandson by painting him in a red wagon for a mural on the C & C Electric building on Line Avenue.

“I’m a pebble that I throw across a lake and it causes ripples. If you’re on the other side and seen one of my ripples and it causes you to smile, then I’ve done my job.”

So far, Opp has complete nine art projects in the East Bank District with two more coming up this summer. His art has helped a lot of businesses there gain a visual identity.

“I’ve done big public art projects all around the country, but my heart is here that’s where I was planted. Now my concentration is on the East Bank District.” 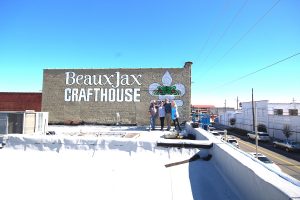 Opp is always looking to the future. He says that people always ask him out of all his art projects, which is his favorite?

“It’s the next project. I’m happy with what I’ve done, but there is always something new down the road.”

To check out the work Opp is doing in the East Bank, visit this website.