There’s a rush of people and the clock’s ticking as last minute reviews and recommendations are made. Keyboards are clacking away as words get entered into a digital readout,  music is being selected and queued. A door flies open and with a flip of a switch a darkened room gets illuminated. A flurry of activity ensues as young students in their teens take various positions behind computer workstations,  control panels, and cameras. Presenters take their spots behind a news set, audible commands are shouted across the room and as someone yells out “thirty seconds,” the chaos settles into a barely perceptible murmur and then in unison all share in the countdown:  “three…… two……ONE!!” and a music intro is played.

“Good Morning Panthers, this is Allie …and this is Kathleen and you’re watching KPAW News!” is the greeting made by two young ladies, both students at Parkway High School, as they begin another TV broadcast to the whole student body.  It’s just one component of a daily media event that’s part of a special broadcasting class offered at Parkway High School in Bossier.

Twenty years in the making

“It’s been going on since 1989,” said Julie Edwards who teaches the class.  “We do a broadcast every day and just in the morning.” 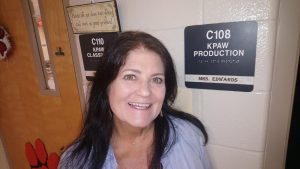 Edwards is a Parkway alum and graduate of Northeast Louisiana University. She teaches the ins and outs of media production at Parkway High School. Every day she marshals a class of high schoolers as they piece together a daily news program that is broadcast throughout the school closed-circuit cable system.

The broadcasting class features two rooms, on one side a traditional classroom and the other a TV studio that houses a collection of different video cameras, TV sets, computers, and design elements needed to create a set.

“We were scrounging around for equipment here and there and people were throwing out old Apple monitors from ’83,” explained Edwards.  “Many items are bought through grants I’ve written, most recent newer items are the Dracast lights and the teleprompter.”

Although the studio isn’t quite like anything you’d see at a regular commercial news television station, it still has everything necessary to allow these students to create videos and put together a pretty good news program focused on the school, its activities and on the students themselves.

“We do special events,”said Edwards. “We just finished “Meet The Panthers” which was a series on the football players and the students worked up here on the summertime.  They compiled it and put it out last weekend.”

There’s a lot that goes into each newscast as each student has to learn to do every single job throughout the class rotation from running cameras, lights, technical controls, computer graphics, and audio; to name just a few of the many jobs that go into a daily TV program.

Hannah Wilder is a Senior at Parkway and she finds the KPAW experience great for anyone considering a job in media. 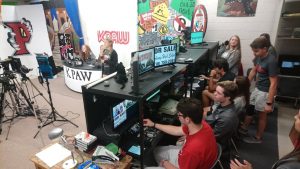 Learning technology is one thing but the class focus is also about working together as a team.  Lindsey Hudson, also a Senior at Parkway finds there are important lessons learned in a sort of organized chaos.

“It is hectic and there are times when you’re running with your head knocked off and you don’t know where you’re going,” said Lindsey. “But at the end of the day you trust your people and you have your job and they have their job and you know that you are going to get it done and make the show the best that you can. “

Finishing what you start

There’s more to just taking a broadcasting class at Parkway as students have to demonstrate a willingness to finish what they start.  As instructor Julie Edwards puts it, students are put through the tasks just like they would if working at a TV production facility.

“The students have an obligation process they have to go through,” explained Edwards.  They have to complete a video package to show me that it’s more than just talent. And then they have eight packages they need to complete before the end of the term.  So it’s basically within a term it’s two to three weeks between each package and they work in pairs.”

A “package” is broadcast jargon for “video segment” which combines video footage focusing on a given topic.  The elements include interviews of other students, footage that supports the story being told, a reporter’s narration and graphics with music.  And it’s done every single day.

Zach Edwards, a Junior at Parkway offers some insight as to what a typical KPAW news program might include. 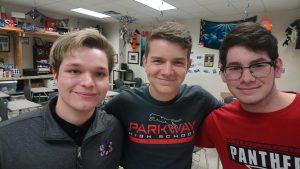 “It’s definitely a news outlet for other students who watch it on our TV,” he said. “We talk about everything that’s upcoming events, and fundraisers. We also talk about things at the beginning of the year like orientation, dress codes, rules to follow and upcoming clubs that people can join.”

But there’s more than just producing a student TV news program as the class offers other valuable opportunities for students as well.

“KPAW news is a good way to get involved in your school and learn things like the video editing software Final Cut Pro that can help you if you’re interested in that sort of thing”, said Garrison Gay, a Senior at Parkway who is also looking at possibly working in the movie industry.  But he also said “It’s also a fun way to be seen among your classmates and have a lot of fun.”

Edwards agrees adding, “KPAW News really gives me ways to connect to people in the school that I wouldn’t have opportunities to connect with not only with classmates but students outside the class.”