The East Bank District has taken off ever since it opened almost two years ago, and now it’s adding another tenant with a Gulf Coast style oyster restaurant and daiquiri bar.

The Frozen Pirogue, located at 515 Barksdale Blvd., will feature oysters served up several different ways, appetizers, a large selection of daiquiris and a full bar.

There will also be a covered patio featuring live music every weekend. The new restaurant is the brainchild of Beau Hays and Peanut, from BeauxJax Crafthouse, and Doug Rodgers, and Geno and Jennifer Goodman, from Bayou Axe Co. Beau says the new venture grew out of the partnership they’ve made with their neighbors at Bayou Axe Co.

“Being around while they were doing the build out, we’ve come to learn a lot about their work ethic and it matched ours,” he said. “Geno made a joke the first week that they got down here and said, ‘One day, we’re gonna be partners.’” 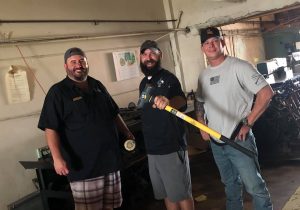 “We’re cut from the same thread. When I came in here, they helped me with everything. We just click,” Geno added. “Our secret is we out work everybody.”

He added that when he first saw his current building, he noticed that BeauxJax has a 2-hour wait for its customers. Geno immediately saw an opportunity in the people sitting outside, waiting to eat. Beau added that his customers became their customers and vice versa.

“The moment they opened their doors, our business picked up,” Beau reflected. “I think the district is exciting enough that it’s more about growing the pie, versus growing the slice.”

Geno revealed that he and Beau were in the alley behind their buildings when they realized someone would come into the space next door and be competition. That’s when they decided to join forces.

“Beau told Peanut that evening, I told my wife and partner that evening and by Monday, Beau had the plans,” Geno said. 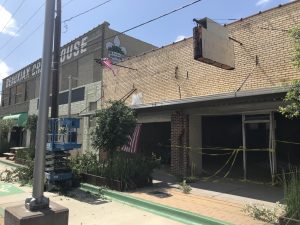 The Beale Street/Burbon Street aesthetic was the inspiration, with the initial seed that became The Frozen Pirogue being a daiquiri bar. While BeauxJax built their name on Cajun food, Geno pointed out they needed something different, and the idea came about to elevate the menu a little. They plan to launch with eight types of oysters, marinated crab claws, cochon de lait, red fish couvillion, biscuits and andouille gravy, seafood stuffed avocados, and six signature daiquiris. They plan to serve a dozen oysters in an 18-inch pirogue, half dozen oysters in a 12-inch pirogue, both loaded with ice and oysters on the half shell.

But the secret weapon will be the patio space and its architecture that catches the breeze off the river, creating a naturally air circulated patio.

“We’re taking a 100-year-old shopping center and letting it talk to us. There’s really neat features in here from the old brick to the plumbing,” Beau said. “When we opened the food truck, we never dreamed of owning a city block. It just keeps growing, but it’s because people keep coming.”

The Frozen Pirogue is the first in a grand plan that will see Beau and Peanut create a wedding venue above their restaurant while Geno and his partners create a piano bar that looks down on Bayou Axe Co.

The idea is to separate their properties to where customers are walking to another room and get a whole different experience, but, at the same time, it all feels like one establishment.

“My goal when we came down here was always to see this grow into, like a Beale Street. We used to take our food truck up to Memphis and we spent a lot of time on Beale Street. It’s family oriented until about 9 p.m. and then it turns into something fun,” Beau said. “We’re right in front of the casinos, I-20 is right there, it’s a perfect location to have something tourism driven. Entertainment and hospitality is what we do.” 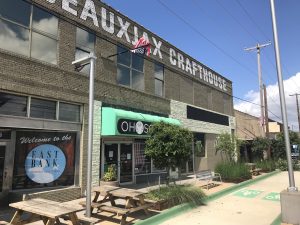 Geno said customers can go to a lot of places and get the same run of the mill entertainment and dining experience, but they, and their partners, both have a product that sells and they’re all having a good time, which spreads that to their customers.

“It’s never gonna be uptight and stuffy, this is a good time,” Beau added. “I think Bossier is a blue collar town, so it’s blue collar fun.”