And in Bossier Parish, it’s the only place where you can join 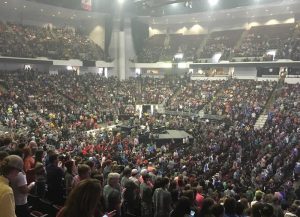 13,999 of your closest friends for a concert, sporting event, or graduation ceremony.

You’ve probably already been there.

It’s not brand new … but the name is.

For more than 20 years, the arena, which was first called the CenturyTel Center, and the CenturyLink Center after that, has been packing in crowds to see big-name performers in concert.

Consequently, Louisiana locals love the fact that they can attend big-name entertainment events without having to the bigger cities.

Some of the notable concert performers are:

The arena has been ranked in the top 50 arena venues for ticket sales in the past.

Much More Than Music

In addition to live music, the arena has also hosted a variety of world-class sporting events.

For example, it was home to the Shreveport Mudbugs hockey team for 11 years.

And the Bossier-Shreveport Battle Wings AFL team played there for six years.

Many other sporting events have taken place at the arena:

And don’t forget about the:

First – is the name. 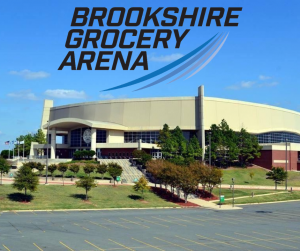 Brookshire Grocery Co. of Tyler, Texas, has been a well-known and well-loved part of the community for more than 92 years.

In addition to their commitment to excellent service for their store customers, they are dedicated to building the community.

So Brookshire’s spent $4.2 million to have their name on the arena building for the next ten years.

Their reasoning is simple: To help bring tourism and revenue to our city.

Second, Bossier City made nearly $10 million in improvements to the arena before the name change took place.

The arena has received a facelift for some of the areas and has a few brand-new features for your enjoyment, such as:

Many of the events scheduled in 2019 and 2020 had to be postponed during the height of the Coronavirus pandemic.

However, safety measures have been put in place, and the arena has new, fun events on the calendar:

The arena is managed by ASM Global, a mega-manager for venues and services. ASM Global manages more than 300 of the world’s most prestigious arenas.

Rebecca Bonnevie, General Manager of the Brookshire Grocery Arena, handles the local responsibilities for the arena. You can contact her office at 318-747-2501.

So, if you’re looking for a great entertainment experience, remember the Brookshire Grocery Arena. You’ll find something fun for every member of the family.