What was once old, outdated, and ignored by most people is now shiny, brand new and will have a grand opening Saturday, November 25th as “Old Downtown Bossier” is now the “New East Bank District and Plaza”. There’s going to be a celebration featuring live entertainment, food trucks, craft beers, artist popups, children’s activities and more. Pam Glorioso, Chief Administrative Officer for Bossier City explains the event. “Everything starts at 11am in the morning leading up to an official 3pm ribbon-cutting.” People who attend this event are encouraged to listen to live music by “Southern Roots” at the performance area in the plaza. And when evening comes people can move towards the riverfront to see “Rockets Over the Red Fireworks” when it lights up the sky at 7pm. 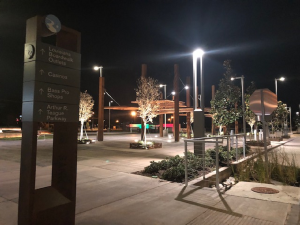 This event caps a process that has taken years in the planning to finally arrive to a re-launch of the downtown area. “The project took several decades of old plans and cumulated to a new plan that we called the Bossier Re-envisioning plan” explained Glorioso, “we took a piece of downtown beginning with Traffic Street going east to Hamilton Road and totally re-did the infrastructure in that area, laying new road, new bike lane, new sidewalks and new landscape.”

And areas that were once considered a blighted part of downtown are no more as the city purchased many of the old homes and buildings which led up to the redevelopment of the area. “Since we started doing this we now see new energy and synergy coming in with new businesses,” Glorioso added. Since the re-development of the district started some 18 months ago, new restaurants have moved in the area. There’s also well-established Flying Heart Brewing and long-time favorite l’Italiano restaurant that drew tourists even during construction. Glorioso says “What this comes from is $15-million dollars being invested by the city in downtown Bossier. We see a lot more growth to come in that area, some residential housing, some apartments and single-family homes and some additional businesses to be located in the downtown area.”

Construction on the district has taken about 18 months and while in progress it did have its share of traffic frustrations; but, that’s not the case now as the roadwork is complete and the district is ready. The anticipated response from people visiting the area is expected to be huge as the East Bank District will draw more visitors to the downtown area than ever before. “Downtown Bossier was put in the back corner and forgotten about” says Glorioso, “… no one even called it downtown Bossier. So, we’re trying to dust off the ‘old downtown’, take that word away and re-vision it with the East Bank District and Plaza becoming the new synergy for Bossier City.”

The New East Bank District and Plaza Grand Opening starts at 11am with official ribbon cutting at 3pm and will last until 7pm. Ground central for all activities is the Plaza on 700 Barksdale Boulevard. Public is invited, and admission is free. Music performance by “Southern Roots” will begin at noon.