When local sports teams accomplish amazing feats, the recognition they receive can shine a light on coaching volunteers. Benton Middle School’s archery team won the 2019 NASP national championships and the Benton Elementary archery team earned the right to call themselves world champions in 2018.

During this time, volunteer coach Autry Lowry, who helps coach both teams, has received some well-deserved time in the limelight. But Lowry never set out to win championships or lead teams to glory.

The story of why he started coaching is a short and simple one.

“My daughter shot several years ago and then the elementary school coach quit,” Lowry said. “The kids didn’t have a coach, so I just kind of started like that. It just kind of took off from there.”

A little deeper dig reveals that the true wonder of Lowry’s impact on the Benton archery team is not so simple at all. Lowry, a baseball player at Airline High School in his school days, was never even interested in archery. He began his volunteer coaching career because he saw a need and filled it. 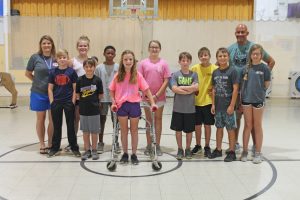 Yet, when his daughter moved on from one team to the other, he kept coaching. There is something more that drives this full-time Benton Firefighter to the Benton Elementary School gym several times a week.

“I have a young lady that shoots that has cerebral palsy. If it wasn’t for her I probably wouldn’t still be doing it.”

The young lady he speaks of is Rylie Duos, a girl diagnosed with cerebral palsy at six months of age. She not only has an inspiring personal story and a foundation – the CRD No Limits Foundation who’s goal it is to reach and help as many special needs kids as possible – she’s also an amazing shot.

Duos’ archery prowess has gained her a measure of local fame and led her to shoot into the 220’s out of a top score of 300. Lowry has been crucial to her success, but his impact goes beyond coaching. He designed and built a stand that assists Duos during archery practice and competition.

The stand has been essential to the archery story in Benton and will likely help others with similar needs across the country. Still, Lowry doesn’t accept much praise for the design and in fact has no plans to profit from it in any way.

What’s truly remarkable about Duos and Lowry is that his time coaching her has been as essential for him as for her. Lowry had a bad fall a few years ago that caused him physical and emotional problems.

“I’ve had four neck surgeries. I jumped off the side of an apartment and hurt my neck while we were fighting a fire,” Lowry said. “The first surgery went bad. It paralyzed the left side of my throat and tongue.”

The difficult recovery process caused Lowry to go through a time of depression. During that time, Lowry drew inspiration from Duos never giving up.

“I appreciate somebody that gives 110 percent on everything they do. And she started shooting and I built her a stand and it just kind of evolved from there.”

The tenacious way Duos battled through cerebral palsy to achieve her archery goals helped Lowry’s battle when he needed it most.

“I guess in a roundabout way, I really appreciated her working that hard,” Lowry said. “It gave me a purpose because of the struggles that I was battling at that time.”

He hasn’t stopped or slowed down since. The Benton archery teams he volunteers with have been an avenue for Lowry to help teach the kids important life lessons and to watch them grow.

“You take a kid that is very bashful, they don’t know a lot about themselves,” Lowry said. “Over the course of the year, they’re calling themselves a national champion. You see them mature. You see them evolve into this person that they’re supposed to be.”

In the end, Lowry seems fulfilled by helping these kids realize dreams and learn lessons that nobody will ever be able to take away from them. 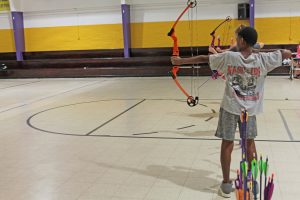 “It gives them some direction. It teaches them about work ethic, about competing, about nothing’s given. Everything’s earned.”

During the 2019 national championships, the NASP honored Lowry with the NASP Superhero award for recognition of outstanding non-paid volunteers. For Lowry, the award was unexpected.

“I was surprised,” Lowry said. “Because I don’t consider myself that. I do it to help the kids get better.”